A hard and rugged everyday life

In their diet meat was basic, of cow and pork, which buccaneers used to prepare, as expert hunters and smokers.

Pirates preferred heavy food, as bullock ragout or wild boar, and the salmigondis, that consisted of a stew of meats and vegetables very flavored.

In long voyages they fed on tortoise meat, which they used to keep alive in the ships, putting them on their back and watering them frequently with sea water.

The regular drink of pirates was rum, which in many occasions they reduced with water and called it rum toddy. They got beer, brandy or rum by exchanging their booty for shipments of ships that traded with them, especially in Tortuga Island.

A pirate is, paradoxically a believer man. As Exquemelin tells, who was an illustrious Dutch scientist – doctor that joined a pirate ship; they prayed always before every meal. Before a combat, pirates prayed for success in their venture, although with Barbanegra, they affirmed that he had done a pact with Devil.

At combats, they used to fight wildly knowing that if they were made prisoners, it would be the gallows. They carried heavy weapons: sabers, pikes, axes and others that provoked real slaughter. Pirates injured in combat were attended by the surgeon – barber that every crew had; wounds were disinfected by alcohol and the members in danger of gangrene were amputated with a carpenter’s saw. 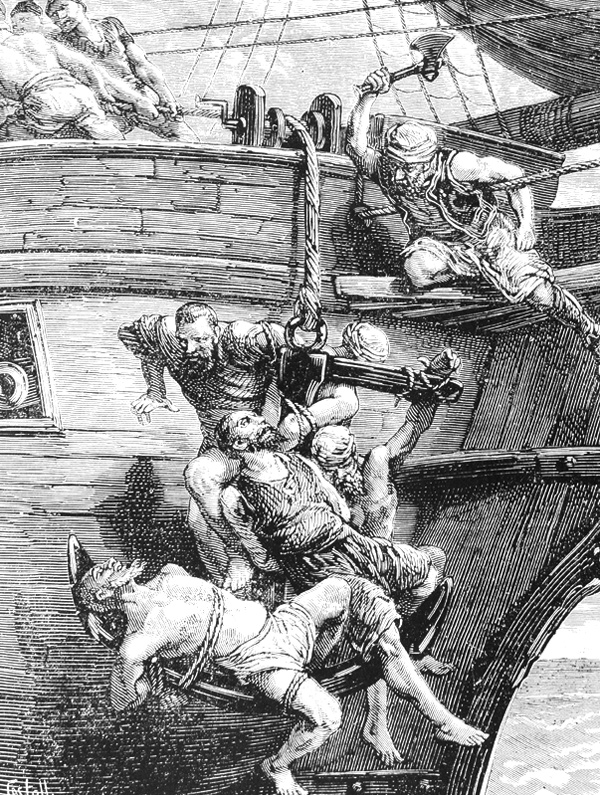